We hope this guide offers enough information to give novice and experienced CBD users confidence in what they are consuming and choosing the best product for them. As always you should consult with your physician before adding anything to your regimen.

Of the more than 120 cannabinoids so far identified in the cannabis plant, cannabidiol is the second most common after tetrahydrocannabinol (THC) found in the cannabis plant. More commonly known as CBD, cannabidiol feeds every known receptor in our body’s endocannabinoid system. Our body’s endocannabinoid system is made up of specific receptors that allow us to intake certain amounts of various cannabinoids to help regulate homeostasis. Because our body itself regulates the amount of cannabinoids our receptors will receive, there has never been an overdose of cannabidiol in the thousands of years humans have been interacting with this plant.
The legal regulation of cannabis and hemp has allowed for widespread use of this compound with individuals spanning all demographics reporting some kind of relief.

Because of the way CBD works in our bodies, the experience can be a bit different for each individual. CBD is a safe, non-addictive plant based natural option that is being recommended by doctors all over the world for a variety of conditions.  The other active phytocannabinoid: tetrahydrocannabinol (THC), the compound that causes the high that cannabis is famous for has to be in very low amounts in hemp according to the 2018 Farm Bill with concentrations of no more than .3% delta9 thc.  These are the two components of cannabis that have been most studied by scientists. Both CBD and THC have significant therapeutic attributes. If You are considering CBD or a cannabis product as an option it is always a good idea to talk with your doctor about incoorporating into your regimen, especially if you take other medications or supplements that may interact with any current medications you may be using.

There are hundreds of different types of cannabinoids and terpenes that determine the makeup of cannabis and hemp strains. Concentrations or percentages of each type of cannabinoid ranges widely from plant to plant and strain to strain. Same with terpenes. These compounds work together synergistically in our bodies to produce what we call the entourage effect.. Always ask for the lab reports on the flower or products you intend to purchase and consume. The lab report known as a Certificate of Analysis (COA). The COA will have not just your potency percentages of  the product but also show you if it has been tested for pesticides, microbial, residuals solvents or heavy metals. This report may also contain a terpene profile.

-Sativa is commonly known to be uplifting.

-Indica is commonly known to be more sedative.

It is important to note that CBD products are generally not classified as Sativa or Indica strains, because they are usually a hybrid  of mostly unknown lineages. Secreted in the same glands that produce cannabinoids like THC and CBD, terpenes are aromatic oils that color cannabis and hemp varieties with distinctive flavors like citrus, berry, mint, and pine. Terpenes play a key role in differentiating the effects of various cannabis strains, but more studies are needed to understand how and to what extent. Here are some examples of common terpenes, where else they are found in nature, and their vaporization temps for the nerds. We encourage patients to do their own research on the effects of individual terpenes.

-Myrcene, also found in hops, mango, thyme, and lemongrass has an herbal scent and calming effect. It is the most common terpene found in modern cannabis. This terpene vaporizes at 332*F (167*C). Black Cherry Bliss is the Banner Harvest strain with the highest myrcene content.

-Limonene, also found in fruit rinds, rosemary, juniper, and peppermint has a citrus aroma and a mood elevating effect. Vaporizes at 348*F (176*C). Baby Yo~Da Jazz is the Banner Harvest strain with the highest limonene content.

-Caryophyllene is the only terpene known to also act as a cannabinoid. It can activate our endocannabinoid system to potentially provide anti-inflammatory effects. With a peppery spice aroma it is also found in black pepper, cloves, and cinnamon. Vaporizing at 266*F (130*C). Baby Yo~Da Jazz also has the highest caryophyllene content of the Banner Harvest Strains followed closely by Skunk Berry.

-Terpinolene is the dominant terpene in about 10% of commercial cannabis strains. It is also found in lilacs, nutmeg, and cumin and has a piney, floral, and herbal aroma. Vaporizing at 366*F (186*C). Black Cherry Bliss also has the highest Terpinolene content of the Banner Harvest strains.

-Pinene is the most common natural terpene in the world. It is also found in pine needles, rosemary, basil, parsley, and dill with a strong pine aroma. Vaporizing at 311*F (155*C). Brilliance is the Banner Harvest strain has the highest Pinene content.

-Bisabolol is a terpene that is also commonly produced by the chamomile flower and is known for its light, sweet, and floral aroma. It vaporizes at 597*F (314*C) Again, Baby~Yoda Jazz is the Banner Harvest strain with the highest bisabolol content.

From Our Family to Yours, Be Well 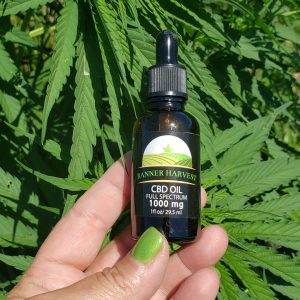 Free Shipping on orders of $75 or more - Gift Certificates Available